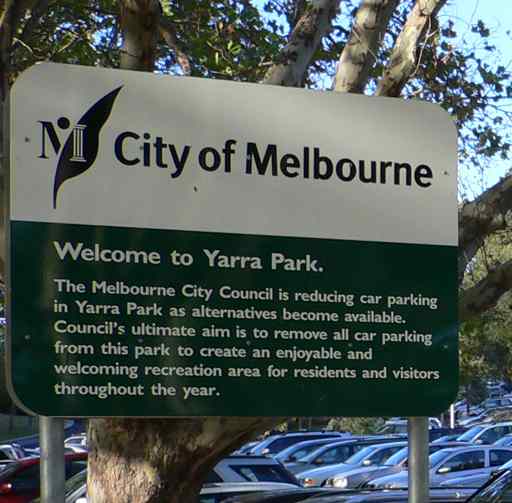 Return the Park to the People!

Article: Government pours our money into the Southern Stand.
Comment left on this website from an MCG football patron: "Couldn't agree more with this campaign, something I've wondered about for a long time.  Such a shame to see this historic area being ruined.  Also it's dangerous.  84,000+ leaving the G today.  It's dark and raining and there are idiots trying to drive through the departing people.  Shouldn't have to worry about getting run over until you leave the MCG area."

It's on in Central Park, NY also: http://www.transalt.org/campaigns/cpark

Government offers to give away Yarra Park

http://www.news.com.au/heraldsun/story/0,,25217976-2862,00.html
“the Government offered the AFL a package that would: … see the Government take control of Yarra Park (used for parking on match days) and in turn transfer management of it to the MCG Trust.”

The Yarra Park Association recommended a vote for any of these three teams: These candidates have committed to ending car parking at Yarra Park, and all of them have a track record on and off Council opposing parking. Other candidacies, including McMullin, Fowles and Doyle will allow parking to continue.  See the correspondence page. Article: Car is doomed, energy experts warn.

Cr Catherine Ng said the park was being destroyed.  “The park is not a car park so we need to return it to a normal park,” she said.  “It's not about the parking money, that's just … for administration,” she said. “People are using Yarra Park as a convenience and we've extended (the parking contract) because there are no other options.” The State Government should build a car park big enough for all Olympic Park events when it builds its soccer stadium in 2009, Cr Ng said.

Cr Ng is congratulated on her strong stand in defence of the park.

Age article on economic benefit of the Grand Final

Age article discusses economic benefit and whether it is better to have interstate teams in the finals.  While they mention that most economic benefit would accrue from interstate visitors, we can conclude that those visitors don't need to park on the park! Actually they would be far more attracted to beautiful parkland where they could have a picnic before the game.

AFL grab for more of our Park defeated!

Thanks to all those who wrote to Council opposing the AFL land grab, described below.  The Council's environment committee rejected the proposal on Tuesday 5th June.  From the minutes: ‘The Chair Cr Brindley, […] acknowledged receipt of numerous items of written correspondence in relation to Agenda Item 5.6, “AFL Grand Final Centre Square Club”.’  The Committee passed the following motion:
That the Environment Committee:
1.1.  not issue a permit for the Centre Square Club in Yarra Park;
1.2.  explore options with the AFL for alternative sites for the event;
1.3.  resolve that all applications for major events in parkland be brought to Committee before any ‘in principle’ approval status is granted; and
1.4.  request a further report to the Marketing and Events Committee detailing a revised procedure for event applications.

We can now demand that the land in question cease to be used for car parking at all times.  The AFL has admitted it is not needed for parking by proposing to use it for their eateries.

Details of the AFL land grab

Paddock 8 was to be fenced off from September 3 until October 4 (35 days) to allow construction and demolition of marquees and landscaping and catering infrastructure to entertain corporate guests.

We can now see what was finally agreed to: most of Birrarung Marr is alienated for the AFL's use along with a strip of Yarra Park alongside Brunton Avenue.  How ironic (and stupid) to block off the Will.  Barrak bridge, constructed at huge cost to facilitiate pedestrian movement from the City to the 'G, at exactly the time it is most needed.  What else can the City do to make public transport less attractive?